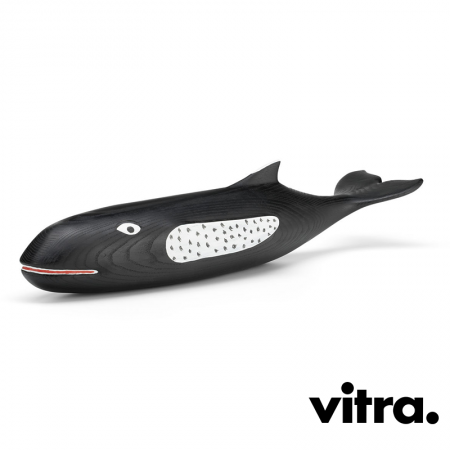 Charles and Ray Eames surrounded themselves in their legendary Eames House with their own designs and an extensive collection of folk art, as well as other small objects found on their travels, in nature and in everyday life. Almost everything they collected was related to aspects of design and form, as Ray explained

We never collected anything just as collectors, but because something was inherent in the piece that made it seem like a good idea to be looking at.

The Eameses organised and decorated their living space with great seriousness and tremendous joy, making the Eames House an ever-changing collage, a reflection of their life.

A prominent feature of the Eames collection was a huge wooden whale over two metres in length, an anonymous work of North American folk art. Charles and Ray Eames were exceptionally fond of the painted object: it occupied a permanent place in the Eames Office and was also used in photo shoots – such as the first photos of the Lounge Chair. The smaller-scale reproduction of the Eames House Whale by Vitra is crafted from alder wood and painted by hand.