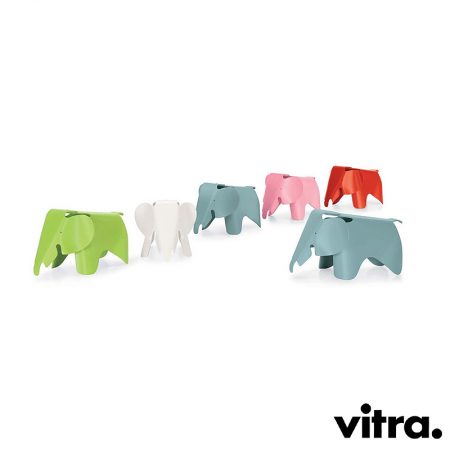 Almost no other animal is as popular as the elephant. Admired for its majestic size and loved because of its gentle nature, the elephant is an everyday presence in our lives – as a stuffed toy, storybook figure or heraldic animal. Charles and Ray Eames also succumbed to the pachyderm’s charm and developed a toy elephant made of plywood in 1945. However, this piece never went into production.
Now manufactured in plastic, the Eames Elephant is available for the first time to the target group for which it was originally intended: children. Whether as a sturdy indoor-outdoor toy or simply as an attractive object in a child’s room, this friendly looking animal with prominent, oversized ears will bring delight to children and parents alike.

Now in 2020, the Eames Elephant will be 75 years old. To commemorate this anniversary, Vitra is launching a special series in grey-stained wood – bringing the intricately produced collector’s item even closer to its living counterparts.

The Eames Elephant (plywood, grey) is available as of September 2020 from nearly 600 Vitra retail partners. The special series is limited to 999 pieces, each of which have a special numbered label.