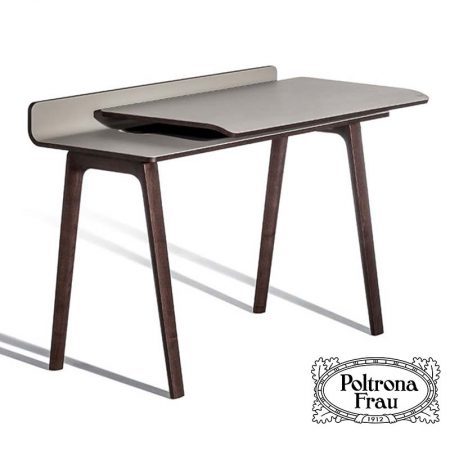 In the world of Japanese calligraphy there is an invisible but deliberate continuity between points, lines and characters called “iren” (意連). This continuous motion ensures that there is a perfect harmony between the symbols even though they appear divided.

Even in an era like ours, so dominated by technology, the spirit of the Iren desk lies not only in its quest for beauty and simplicity but above all in its revival of a natural and harmonious action: a desk that gives rise to new work scenarios and rituals in a naturally fluid relationship between body and object. Designer Kensaku Oshiro envisaged the Iren desk as a small domestic workstation that easily adapts to modern lifestyles.
Thanks to a simple motion, two overlapping surfaces slide over each other to create new work and storage spaces.  The gently sloping upper surface ensures a softer feel while also providing better support for the forearms.
The Iren desk by Poltrona Frau comes in a free-standing version, with the desktop supported by a sawhorse base in solid ash, or a wall-mounted version, supported by brackets. The customer can choose whether the desktop slides left or right when making their order.
Design by Kensaku Oshiro 2021
SKU: abd815286ba1-1-2-1-1-1-1-1-2-1-1-1-1-2 Categories: Desks, Latest Products Tags: iren, Kensaku Oshiro
Brand: Poltrona Frau

Poltrona Frau, Italian company founded in 1912, expresses its maximum achievement in upholstered furniture, including chairs, armchairs, sofas and beds, with a design recognized all over the world. The elegance and exclusivity of timeless design are the result of the skilful craftsmen who have been passing down their knowledge for over 100 years. To offer the best of leather Poltrona Frau constantly searches for the best materials and the best processing techniques between craftsmanship and industrialization.

The wall version can have an LED light fitted at the back.